The Village of Skokie has a long and deep history of commitment to racial justice, equity and inclusion, as illustrated by the following:

Council-Manager Form of Government
Since the Council-Manager form of government was put in place by a referendum of Skokie voters in 1957, the mayor and trustees, as elected officials, set policy and hire a village manager based on qualifications. This professional form of government is designed for the village manager to be responsible for the day-to-day operations of the Village.

See more about the history of the Council-Manager form of government in Skokie. 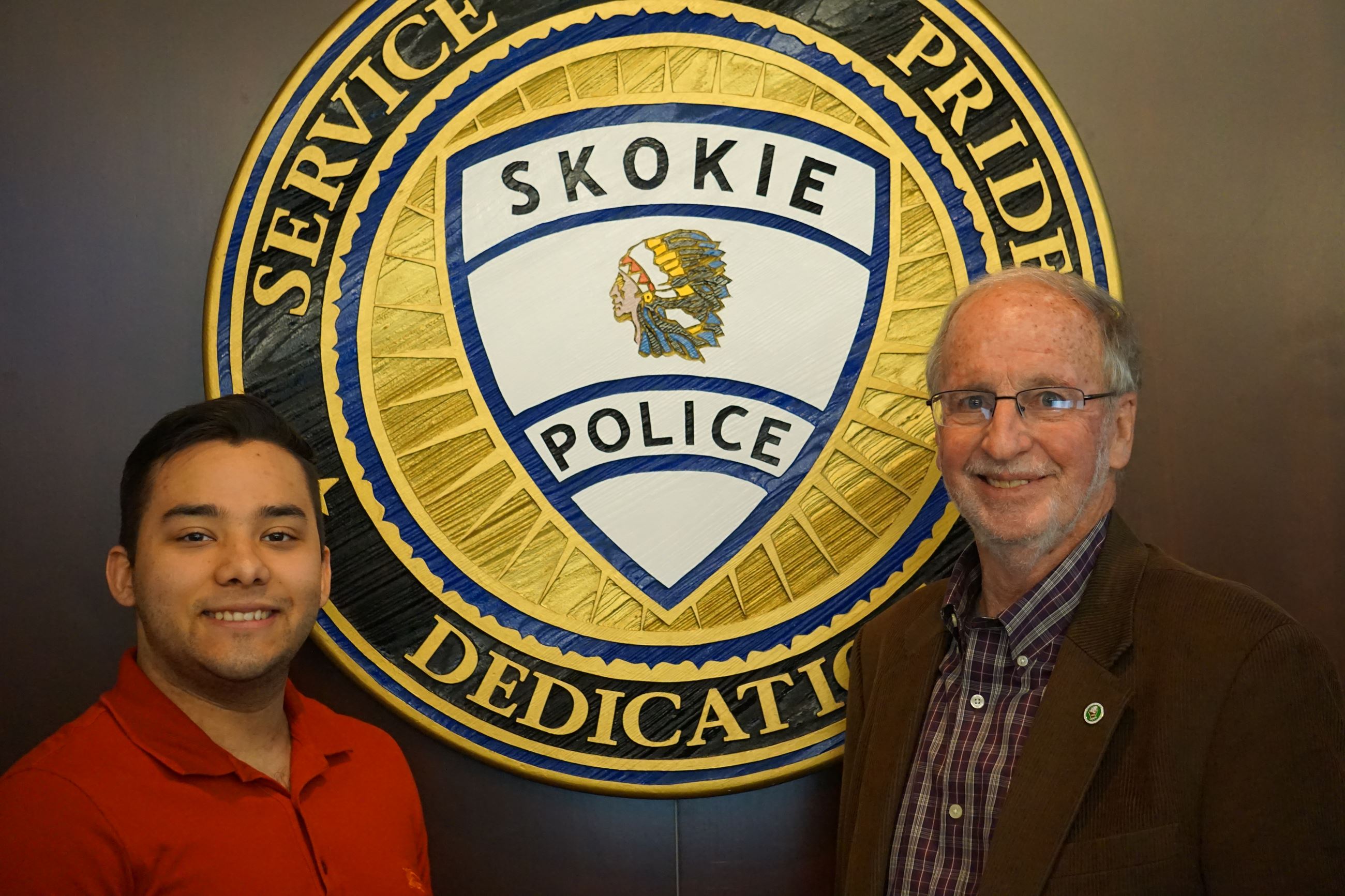 Council-Manager form of government in the community. Since then, the scholarship has provided much-needed financial support to Skokie residents of all ages who attend classes at Oakton while pursuing careers in government administration, public safety, public health and other disciplines related to government operations and public service. To date, scholarships have been given to a wide range of Skokie residents of various ages, races, genders and backgrounds to assist in their educational pursuits. The photo to the right, taken in November 2019, shows Mayor George Van Dusen and Skokie resident Javier Montoya, recipient of the 2019-20 Excellence in Government Management Scholarship, who aspires to a career in law enforcement.

Skokie resident Eric Monzon, a 2012 Niles North graduate, is receiving the 2021 scholarship. Monzon works more than 30 hours a week as a nurse’s assistance while also studying full-time to become a registered nurse. “I would like to learn as much as can, and to the best of my ability in order to assist the people I serve in my community,” Monzon said in his scholarship application.

The application for OCC scholarships, including the Village of Skokie Excellence in Government Management Scholarship, opens on January 1. Applications received by March 31, will receive priority in review and award consideration. The application can be found at www. oakton.edu/scholarships.

Each year, Oakton Community College awards more than $800,000 in scholarships to students who attend the college with an average award of $1,500.

Workforce Training Initiative
In a partnership with Oakton Community College (OCC), the Village successfully applied for $22,500 in grant funds from the Skokie Community Foundation and the Education Foundation Supporting the Students of Niles Township for a workforce training initiative. Village Human Services staff recommend unemployed or under-employed Skokie residents who have applied for the program to enroll in short-term certificate training programs at OCC to improve their wage-earning capacity. The grant funds will cover the full cost of admission, tuition, fees, books and if needed, transportation.

Commitment to Fair Housing and Anti-Discriminatory Housing Practices
The Village of Skokie was one of the earliest pioneers in Illinois relative to fair housing by establishing a Fair Housing Ordinance in 1967.

Human Relations Commission Established
The Village of Skokie Human Relations Commission was created in 1979 to promote unity and to encourage residents to work in integrated ways to strengthen the community. The commission’s purpose is to encourage understanding and respect between residents of various racial, religious and ethnic backgrounds and safeguard the rights of all citizens. At the commission’s request and expense, a commission member recently participated in SEED facilitator training (Seeking Educational Equity & Diversity) and now provides SEED training to community members through a Skokie Cares initiative that organizes SEED training cohorts each year.

Community Development Block Grant Social Service Support
The Village is the direct recipient of federal funding through Community Development Block Grant (CDBG) since 1974.  This is a HUD (U.S. Department of Housing and Urban Development) program originally designed for construction activities that also allows a portion of funding to be made available for public services.  Each year, the Village allocates a significant amount of funding to numerous social service organizations that serve underserved, low-income, vulnerable populations in the community, including seniors, victims of domestic violence, the homeless, individuals with mental and physical disabilities and more.  In the Village’s 47-year history of receiving CDBG funds, a total of almost $5.4 million has been allocated to social service agencies that support the Skokie community.

Skokie Cares
The Village participated in founding the Skokie Cares community group in 2017, taking an active role in developing the Skokie Welcomes Everyone campaign and establishing SEED training cohorts in the community. 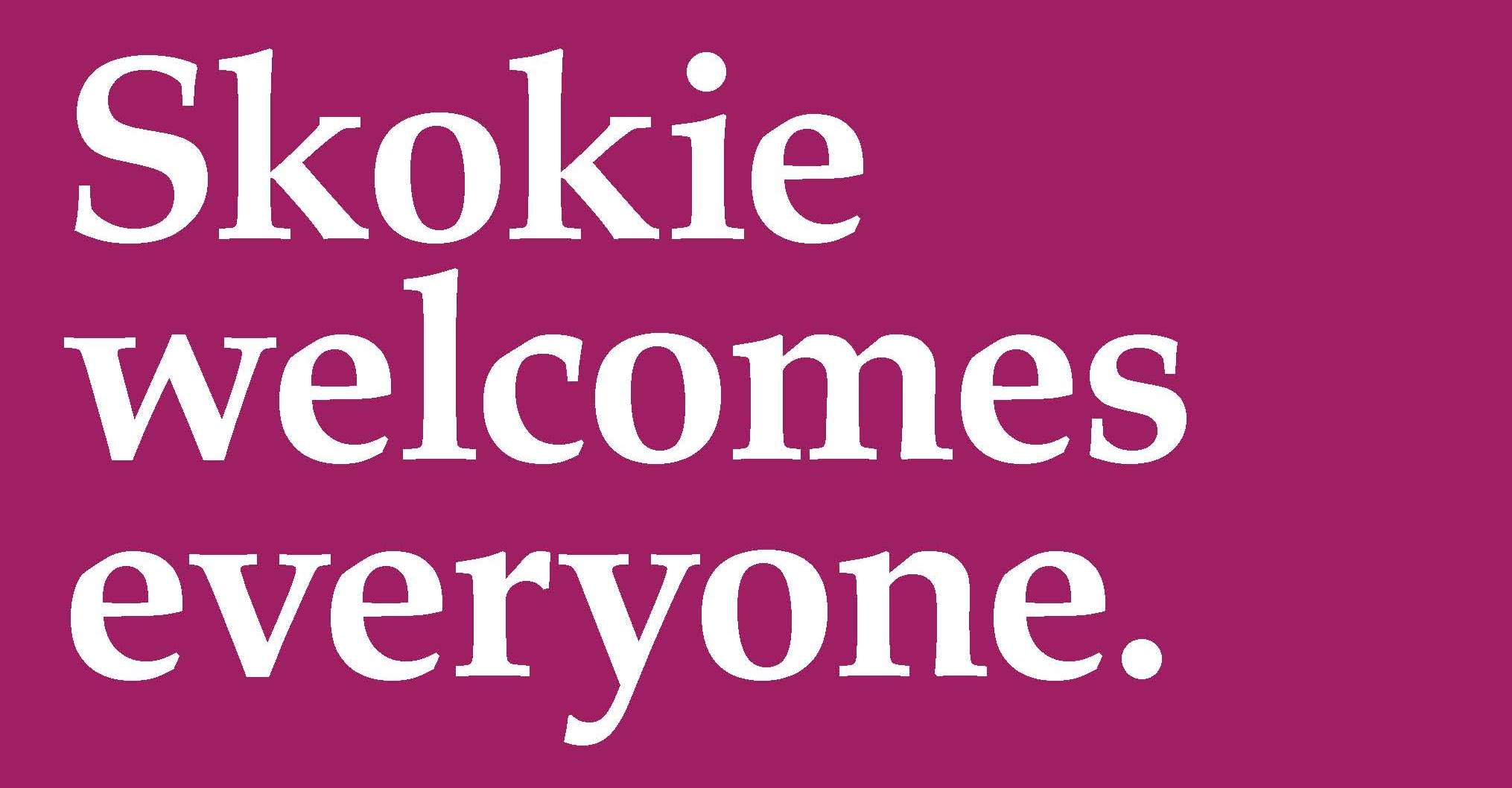 Youth Court Call
The Village has a Youth Outreach Program that is an interdisciplinary program involving the Village’s Human Services Division, the youth outreach worker in the police department, and the Village’s legal department. This program provides a constructive alternative for youthful offenders who receive tickets for Village ordinance violations who may be assigned community service, anger management classes, education programs, or, when indicated, family counseling instead of receiving traditional citations with fines. The objective of the program is to provide guidance and direction to young people. This highly successful program was established in 1998 and helps many young people each year.

Niles Township Youth Coalition
The Village is a founding member of the Niles Township Youth Coalition that began more than 20 years ago as a partnership between the Skokie Police and Human Services staff, local school administrators, social service agencies and other groups interested in the welfare of young people in the community. The group meets monthly throughout the year to discuss problems and issues facing children and teens throughout the community, with an emphasis on how participating groups can form partnerships to address areas of concern.

Professional Accreditation
The Skokie Fire, Police and Public Works Departments all hold full professional accreditation, and Skokie was the first community in the entire country to achieve this standard. A component if each accreditation process , and continuing re-accreditation processes that occur every three to five years, requires outside experts to review each department’s policies and procedures to verify that they meet national industry best practices and standards of excellence. In addition, the Skokie Health Department is one of only seven board-certified municipal health departments in the State of Illinois, and also undergoes regular re-certification reviews.

Skokie Police Department Anti-Bias Policing
The Police Department regularly offers an opportunity for people to provide anonymous feedback and complaints regarding the police department, independent of the accreditation process, and in most years there are no complaints involving any form of bias or injustice. In the rare instance where a complaint was made, evidence brought forth upon investigation could not sustain the complaint.

Ten Shared Principles
The Skokie Police Department was among the first departments to adopt the “Ten Shared Principles” the result of a joint initiative between the Illinois Association of Chiefs of Police and the Illinois NAACP.  The Skokie Police Department has actively supported these principles during their creation and continues that commitment today.  A few of the shared principles include:

For example, Skokie police officers have participated in department-wide training including:

In addition, in 2018, the Police Department hosted the “Procedural Justice for Communities:  A dialogue to Change” where both police officers and community members participated together.

Community Engagement
The Skokie Police Department regularly engages with the community through positive programs like National Night Out, 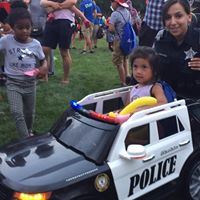 Citizen Police Academy, Cops With Kids, visits to block parties, Wednesdays on the Green, the Skokie Backlot Bash, annual Skokie Festival of Cultures and more. In 2015, the Skokie Police Department launched the Many Cultures, One Community – Keeping Skokie Safe initiative through which police officers spend time in neighborhoods and parks every summer, greeting residents and providing crime prevention information.

Community Review of the Skokie Police Department Use of Force Policy
In early 2020, Mayor George Van Dusen took the Obama Foundation’s Reimagining Policing Pledge and committed to taking four specific actions recommended by the My Brother’s Keeper Alliance that is part of the Obama Foundation. The pledge lists the following actions that are intended to examine public safety policies through an equity lens:

The Skokie Police Department’s Use of Force policy is reviewed annually. At Mayor Van Dusen’s request, the 2020/2021 review was conducted by the volunteer members of the Village’s Public Safety Commission. Members of the Village’s Human Relations Commission also participated in the review process along with representatives of 16 community groups. The review and discussion meetings began in September 2020, and continued through late spring 2021. The meetings are available to be watched live on the Village’s YouTube channel and cable television stations. See more information about the Community Review of the Skokie Police Department Use of Force Policy.

In summer 2021, the Public Safety Commission made a recommendation to the Village Board based on the community review that included sections on use of force, training, transparency and accountability, trust and community engagement. In early 2022, the Village Board appointed nine community members to a new Skokie Police Use of Force Review Board as was recommended by the Public Safety Commission.

See the Public Safety Commission's recommendation to the Village Board on the Skokie Police Department Use of Force Policy.

Village Government Listens to the Community

The Village has numerous initiatives to listen and solicit feedback from the community, including:

Workforce
The Village values a diverse workforce and works diligently to recruit, hire and retain a diverse workforce. The Village routinely advertises job opportunities in 143 different locations to reach a diverse applicant pool. This list is regularly updated and expanded; several years ago, the Village added fraternities and sororities that are popular for black or other ethnic groups.

The Skokie Police Officers and Firefighters are hired and sworn in by members of the Board of Fire and Police Commissioners, a diverse group of Skokie residents who are appointed by the Mayor and Village Board. The current and immediate past-chairpersons of the board are Black.

Employee Equity Team
In fall 2020, the Village established an inter-disciplinary employee equity that meets regularly to discuss methods of increasing the Village’s equity and inclusivity in the workplace. The Employee Equity Team (Team) recently developed and distributed an anonymous survey on workplace equity and inclusion to all employees, with data received still under analysis. The Team is already in contact with Niles Township High School District 219 about increasing paid internship and job shadow opportunities for Skokie high school students. Plans also are underway to create a series of videos about Village programs and services, highlighting various career paths within local government for Skokie youth.

SEED Training
To date, nearly 30 Village staff members and officials have participated in SEED training (Seeking Educational Equity & Diversity) through the Skokie Cares initiative, and a total of ten staff members are currently enrolled in the training along with another 10 members of the Village’s advisory boards and commissions and two elected officials. The Village will encourage more employees, commissioners and elected officials to participate in future SEED cohort groups. 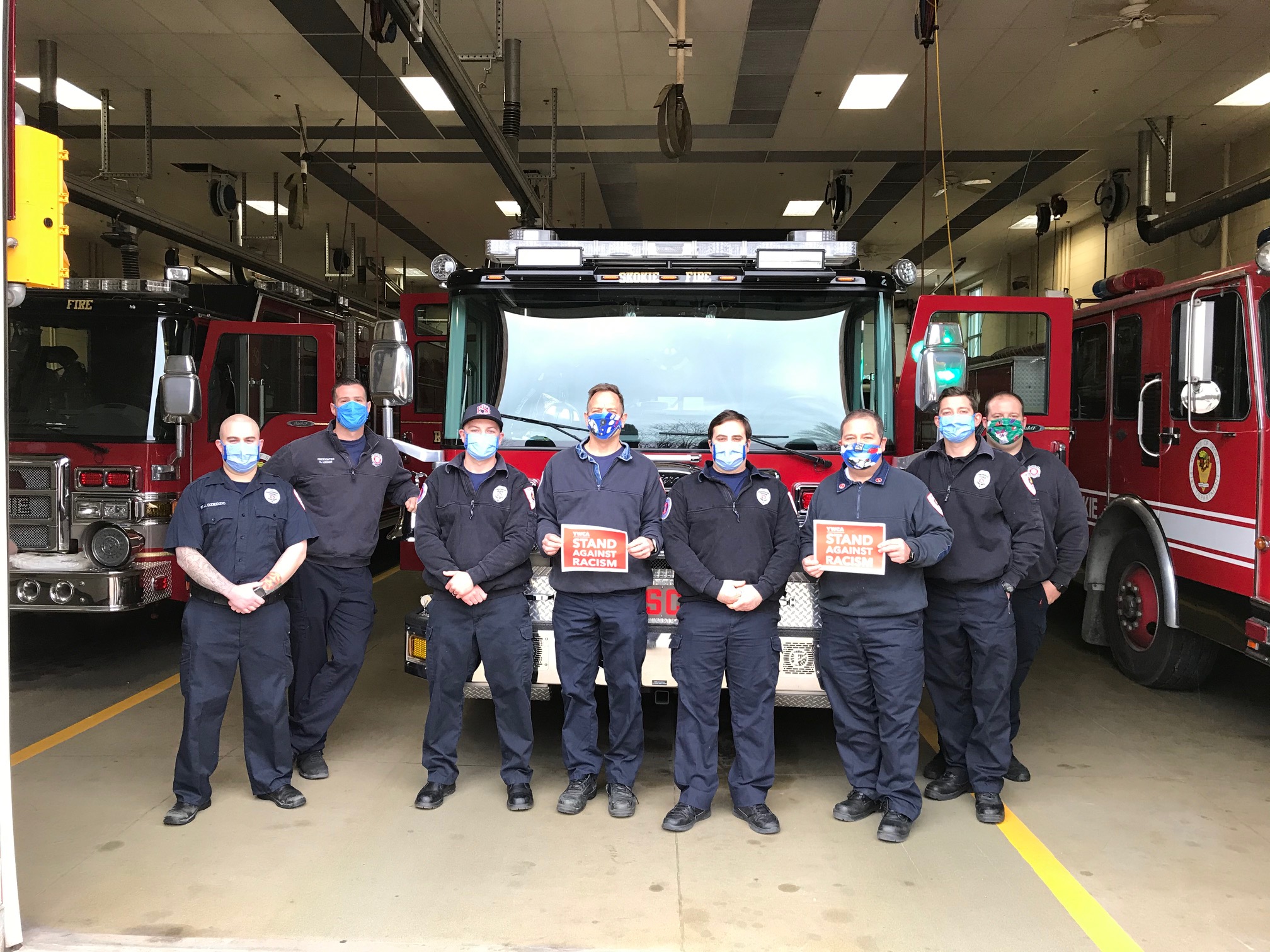 both in partnership with the YMCA North Shore/Evanston. The Village also actively participates in and supports the annual Skokie Festival of Cultures as well as Coming Together in Skokie and Niles Township programs from 2010 forward that encourage cultural and racial appreciation and understanding.The photo to the right shows a group of Skokie firefighters participating in the 2020 Stand Against Racism.

In Conclusion
The Village of Skokie is committed to racial equity, diversity and inclusion as well as social justice and will continue to listen, learn and respond to further advance these initiatives both within the Village workplace and in the community.