In 1957 Skokie residents voted overwhelmingly to adopt the council-manager form of municipal government that remains in effect today. A council-manager government system combines the strong political and policy making leadership of elected officials, such as the Mayor and Board of Trustees, with the strong managerial experience of an appointed village or city manager. Skokie's Village Board includes the Mayor, Village Clerk and Board of Trustees who are the leaders and policy makers elected to represent the community and to concentrate on policy issues that respond to citizens' needs and wishes. In Skokie, six Trustees serve on an "at large" basis and do not represent any one particular geographical area of the community. The Village Manager is appointed by the Mayor and Board of Trustees to carry out policy and ensure that the entire community is being serviced.

The Village of Skokie is a home-rule unit under the 1970 Illinois Constitution. Skokie's Council-Manager form of government was inaugurated in 1957, when residents overwhelmingly voted to adopt the Council-Manager form. The Village Manager functions as the Chief Administrative Officer of the Village. It is the Manager's responsibility to enforce all Village ordinances, recommend policy alternatives to the Board and prepare an annual budget.

The Village Manager directs and coordinates the activities of all Village Departments except the Corporation Counsel Office which, like advisory commissions, reports directly to the Mayor and Board of Trustees.

There are seven positions on the Board of Trustees, including the Mayor and six Trustees. A Village Clerk is also elected. Each elected official serves a four-year term. There are 87 voting precincts in Skokie.

The primary functions of the Mayor are to preside over meetings of the Board of Trustees and to appoint, with the approval of the Board, the Village Manager, the Corporation Counsel and staff, and various boards and commissions. The Mayor can vote on all matters before the Board and must vote in order to break a tie. The Mayor can also veto ordinances, resolutions or motions passed by the Trustees. The Trustees need two-thirds majority vote to override the Mayor's veto. By Illinois State Law, the Mayor also serves as the Village Liquor Commissioner. As the head of the Village, the Mayor acts as a legislative liaison between Skokie and the state and federal governments and represents the Village in a variety of civic functions.

The Trustees, working with the Mayor, serve as the legislative and policy-making body of the Village. All ordinances must be passed by a majority vote of the Board. The Board is also responsible for adopting a Village budget, undertaking an annual audit, confirming all appointments by the Mayor and approving all legal contracts to which the Village is a party. 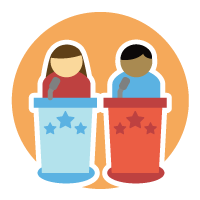