The tradition of bagpipes being played at fire department funerals goes back to when many Irish and Scottish immigrants came to this country. Bagpipes were often played at Celtic funerals and ceils (dances). Many Irish and Scottish immigrants took jobs that were considered "dirty," like firefighters and police officers so the tradition carried over.

Associated with cities such as Boston, New York, Philadelphia and Chicago, pipe bands representing both fire and police often have more than 60 uniformed playing members. They are traditionally known as Emerald Societies after the Emerald Isle. Today, the tradition is universal and not just for the Irish or Scottish. The pipes have come to be a distinguished feature of a fallen hero's funeral. 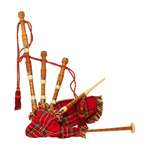