Since the adoption of the Village of Skokie Bicycle Facilities Plan in 2003, the Village has made significant progress implementing the recommended improvements of that plan and now provides more convenient and accessible routes for bicycling throughout Skokie. There are over 45 miles of bike paths and routes throughout the community.

Skokie's first dedicated bike lanes were installed on Howard Street, from Niles Center to East Prairie Roads, a key east/west route. The bike lanes are a designated portion of the roadway that is identified by signage and pavement markings, which segregate bicycles from vehicle traffic. Additionally, designated bicycle routes have been labeled with directional markers throughout the Village. These routes are typically shared with multiple transportation modes. 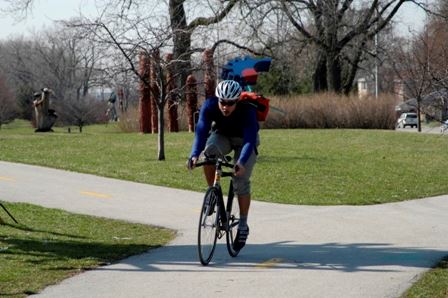 Lastly, the first portion of the Skokie Valley Trail, a multi-use path that accommodates a variety of non-motorized users has been paved north of Golf Road. Further improvements to the Skokie Bike Plan are forthcoming. Learn more on our Bicycle Plan page.